How Old Do You Have to Be to Get Invisalign? 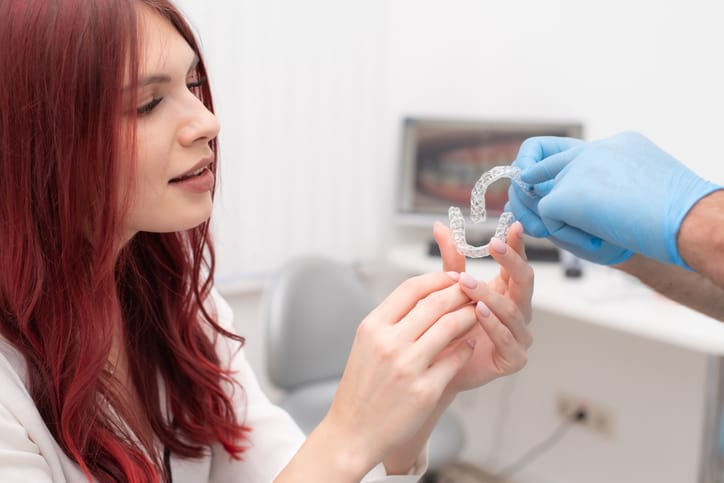 07 Oct How Old Do You Have to Be to Get Invisalign?

Posted at 13:39h in Blog by University Dental

Crooked, crowded, or misaligned teeth don’t just draw unwanted attention—they can also cause a range of different complications, including an increased risk of gum disease and tooth decay, speech problems, and even chronic headaches. While some people are blessed with perfectly straight teeth, others require orthodontic care for correcting their alignment problems. Traditional braces are the most common orthodontic treatment, but Invisalign is rapidly gaining in popularity, particularly for those looking for a less visible solution, or who want to avoid the food restrictions associated with traditional braces. Adults in particular appreciate the discrete nature of Invisalign, but Invisalign works for patients from all age groups.

Invisalign in San Diego is an orthodontic treatment that straightens teeth with the use of clear plastic aligner trays rather than metal or ceramic brackets and wires. Invisalign treats crowded teeth, misaligned teeth, gapped teeth, crooked teeth, overbites, crossbites, underbites, and other alignment issues. A customized set of aligner trays is created to address each individual’s specific dental issues. Each tray is worn 20-22 hours a day for two weeks and then changed out for the next tray in the series.  Slowly, the Invisalign trays move the teeth into their correct alignment. Unlike traditional braces, Invisalign can be removed to eat and to clean the teeth.

How old do you have to be to get Invisalign?

Orthodontic treatment typically begins between the ages of 8 and 14. This is true for both traditional braces and Invisalign. By this age, children have lost their baby teeth but their jawbones are still growing, making it a good time to correct any alignment issues.  Children as young as 6 can use Invisalign to stop pre-existing bite problems from worsening, or as part of an early first phase of more complex orthodontic treatment. Teens, and adults into their 40s, 50s and 60s can also use Invisalign for straightening their teeth, improving their smiles, and optimizing their oral health.  There is no age limit for getting Invisalign treatment, but there are some pros and cons to Invisalign treatment at different ages.

The pros and cons of Invisalign for young children and teens

On the other hand, the removable trays do require a certain level of responsibility. Trays that have been removed for eating can get thrown away on lunch trays or otherwise misplaced.  If your child is prone to losing things or will struggle to keep the trays in 20-22 hours a day, Invisalign might not be the best choice.

The pros and cons of Invisalign for adults

Adults who use Invisalign also tend to appreciate the lack of food restrictions, but the discrete nature of the treatment is also a benefit. Traditional metal braces are often associated with adolescence, so the near-invisibility of the Invisalign trays is usually preferred by adults.

Invisalign treatment typically takes longer for adults because their jawbones have hardened, so the teeth shift more slowly. And just like with teens and children, some adults prefer traditional braces because they eliminate the responsibility of maintaining the level of discipline that the removable trays require.

In general, choosing Invisalign treatment is less about your age and more about weighing the pros and cons and being realistic about how consistent you would be with wearing your aligner trays for 20-22 hours a day.  There are other considerations, of course, such as your budget and the complexity of your dental issues, but the above overview should give you a good idea of whether or not you’re ready to discuss the possibility of Invisalign treatment with your dentist.

Whether you are 8, 16, or 64, we’re happy to answer all your questions about Invisalign and help you decide whether it’s the right orthodontic treatment for you. Just give us a call at (619) 582 4224 to schedule a consultation today.